WIth the long weekend upon us I decided to spend some extra time in the kitchen and make a more elaborate brunch than just our normal run to Barney Greengrass. On Friday while I was at work I saw a tweet about a vegan quiche. I was so swamped I forgot who posted it and I didn’t see the recipe. But I was inspired. So I looked up a few quiche recipes via google that were not vegan and thought – I just might be able to pull this off!

I called my mom for her advice (as I often do when I’m making things up as I go). She is the queen of making killer pies with homemade crust. And since my father has celiac disease, she’s also great at adapting recipes. I’m sure this recipe would be much easier if you used store-bought crust. But store-bought crust is basically a sin in our household and I couldn’t let mom down.

What you’ll need for the crust:

What you’ll need for the filling:

Pre-heat the oven to 400 degrees. Start with your crust. Mix the flour and salt and then add the margarine. Use a fork and cut/mix the shortening into the flour until it becomes pea-sized balls. Add your water one tablespoon at a time, mixing everything together until you’re able to form everything into a ball. The less water you use the more flaky your crust will be, but the more water you use the easier it will be to stick together and roll it out. It’s a tossup.

However you arrive at the ball of dough – make sure you use a lot of flour on your pin and surface to ease the rolling process. I really like using a rubber pastry sheet I picked up a few years back. It allows you to flip the crust over into the plate – which makes everything so much easier! 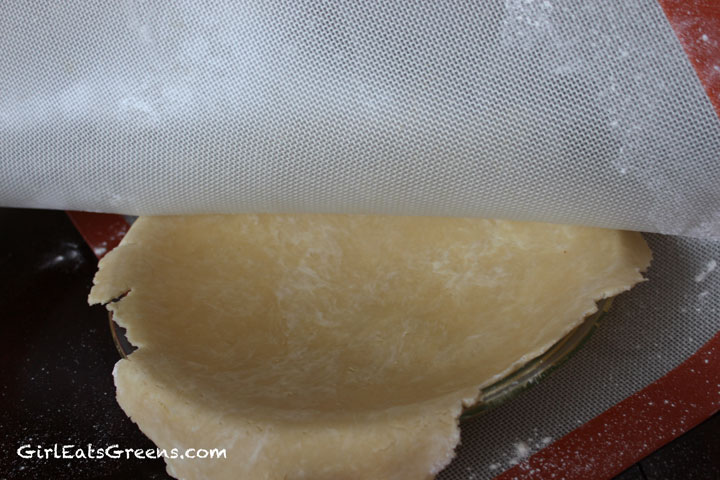 You can do a bit of prettying up after the crust is in the pan – to trim anything that’s laying over the edge and add to sections that may be missing (use a bit of water to attach extra pieces). Pinch the edges to give the crust a pretty trim.

Next, start on the insides. Chop all your veggies up and then add the tofu, milk, garlic and pepper to your ninja or food processor. Blend everything until it resembles a soup. Add salt and pepper and blend again – go ahead and taste to make sure the spices are up to your liking. Pour the mixture into a large bowl and add the vegetables and stir until everything is coated equally. 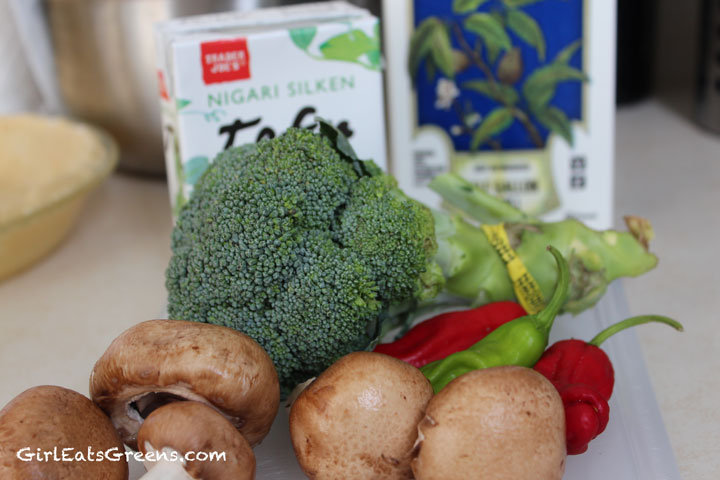 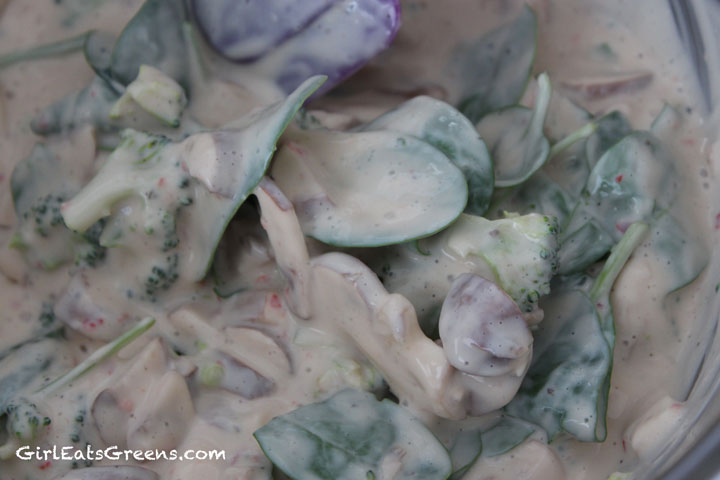 Then pour the insides into the crust and put the tomato slices on top. Place in the oven and bake for 45minutes to an hour, until the insides are bubbling and the crust is slightly browned. If you’d like to cut down on the baking time, you could pre-bake the crust and sautee the vegetables before mixing with the tofu and milk. I prefer to just toss everything into the oven and do other things while waiting. 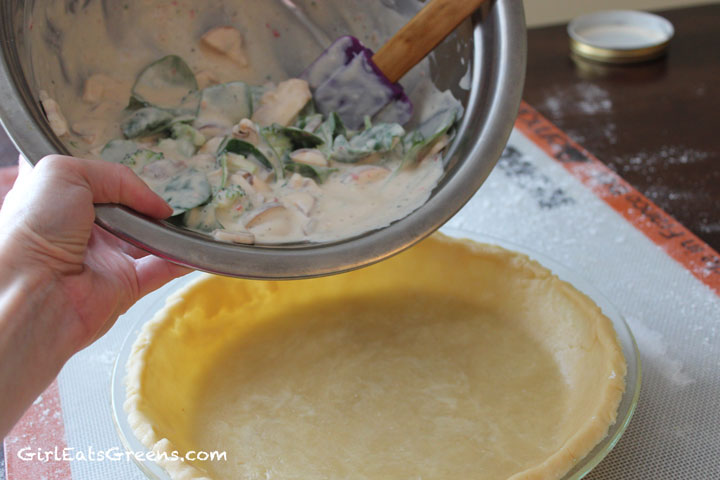 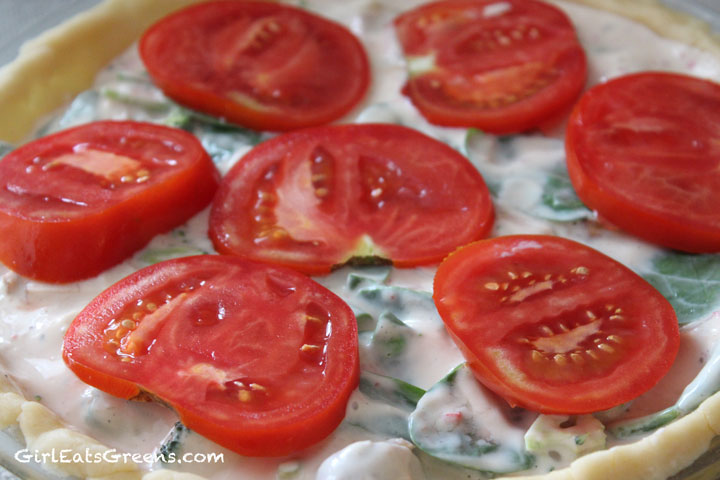 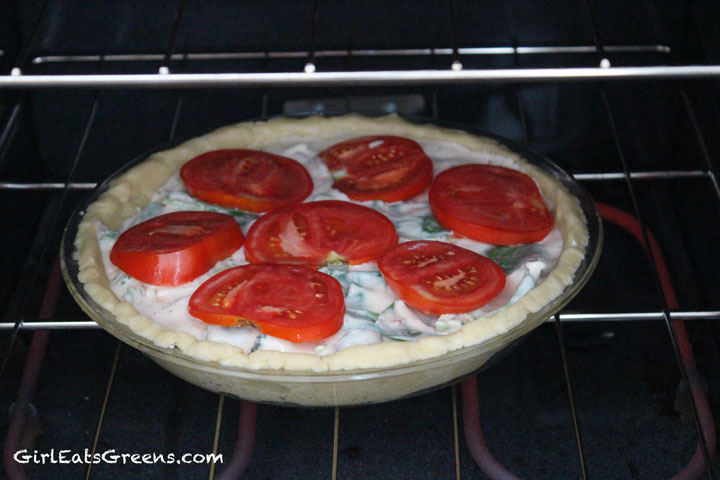 Let the quiche cool for at least 5 minutes before cutting. I was surprised at how great it turned out – flaky crust, the insides were creamy and tasty and I didn’t even miss eggs. Next time around I might add more pepper for even more of a kick. I think you could add basically any vegetables you’d like to the mix, to keep this recipe even more versatile. It’s pretty too – would be good to serve to guests as well. 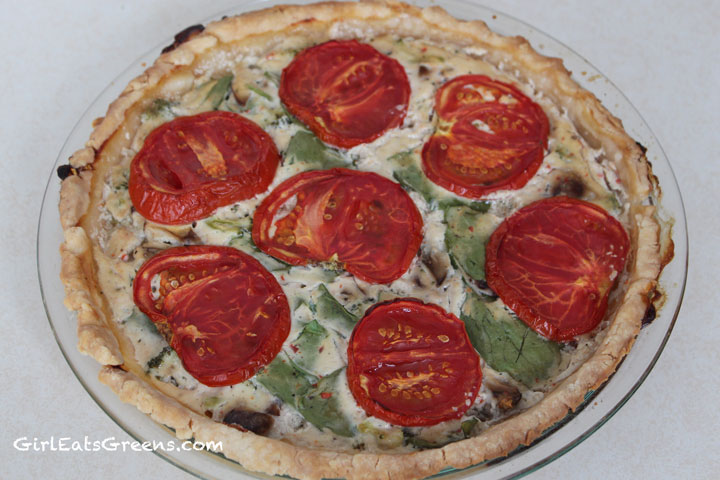 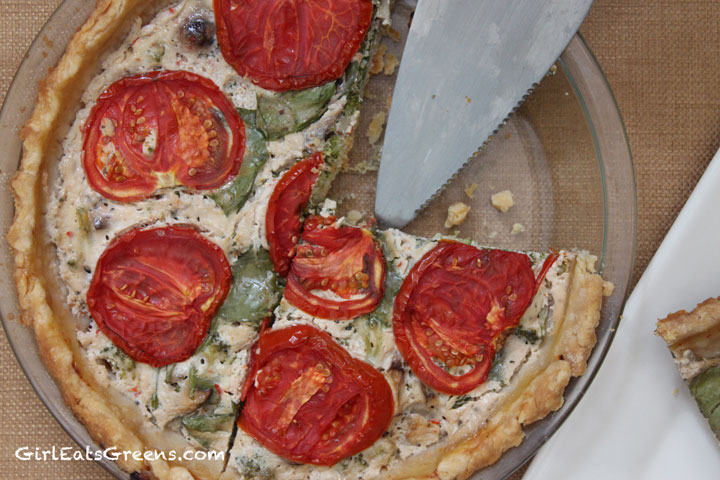