For the 4th of July, R and I didn’t head to a picnic, we didn’t spend the day outside (it was raining), and we didn’t see fireworks (they were on the east side of the city this year – and we didn’t feel like trekking over). So instead, we treated ourselves to a date night. We had a nice dinner at one of our favorite neighborhood vegan restaurants, Candle Cafe West, and stopped by a new restaurant for drinks and continued conversation post-dinner. I love nights like these – when we decide to do something no one else is, and it almost feels like you have the city to yourself. While everyone flocked to the east side for fireworks we had all of Broadway to ourselves. There was hardly anyone in the restaurant – they were closing early for the 4th – and at the bar, the bartender tried out a drink recipe on R that was off menu, just because. The waitresses were taking shots at the bar, because there was no one around. And R and I sat, chatted, and enjoyed the nightcap. It was lovely. Even if I did have a geek out when I realized one of my favorite Law & Order characters also happened to be in the bar. And within all the wonderful of the night was a stand-out dessert. A peach cobbler.

I often find inspiration for recipes to make at home from eating out. Whether it’s inspired by a dish I had, a place I traveled to, or just a desire to see if I could replicate something I tried somewhere, I often get a dish in my head and I just have to make it myself. That was the case with this peach cobbler. 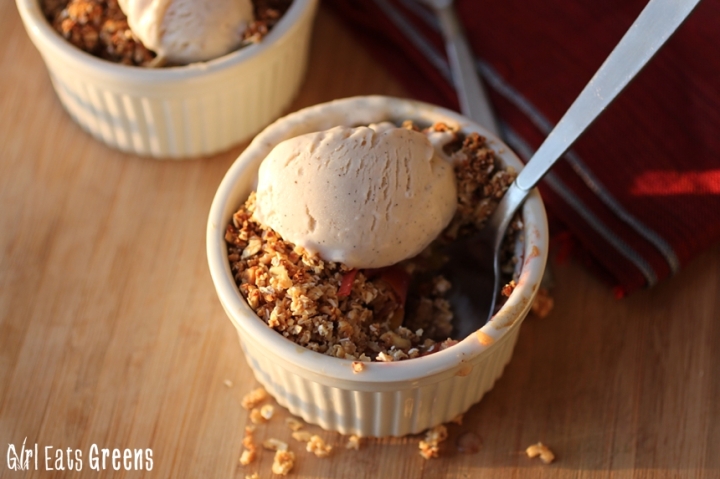 I love the combination of warm and gooey fruit with crunchy topping and smooth ice cream. At the restaurant, the cobbler also came in a ramekin, which happens to be one of my favorite ways to eat food – individual servings and no risk of dessert touching the main course. I’m adverse to my foods touching. Salad touching spaghetti?! Ack! Needless to say, I started plotting the ingredients I would use for my own cobbler almost immediately after dinner.

Luckily for me, the farmer’s market had a whole bunch of fresh peaches which I managed to promptly bruise on the walk home. Knowing I wasn’t going to be able to pack them for lunch in their somewhat sorry state, I knew the time had come to try my hand at the cobbler.

I wanted to make my version as healthy as possible (before adding vegan ice cream) so I added a very teeny tiny amount of agave syrup as a sweetener – there’s only 1 tablespoon total. I also wanted the topping to be healthier so instead of a pie-crust top, I used a combination of chickpea flour (more protein than other flour & added bonus of being gluten-free!), oats, flax meal, and slivered almonds. The result was a great crispy texture that was just-sweet-enough to seem decadent but remain 100% free of guilt. 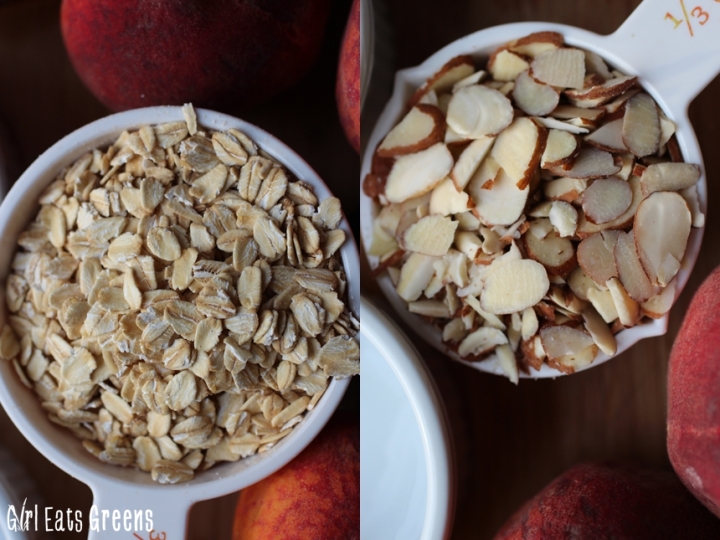 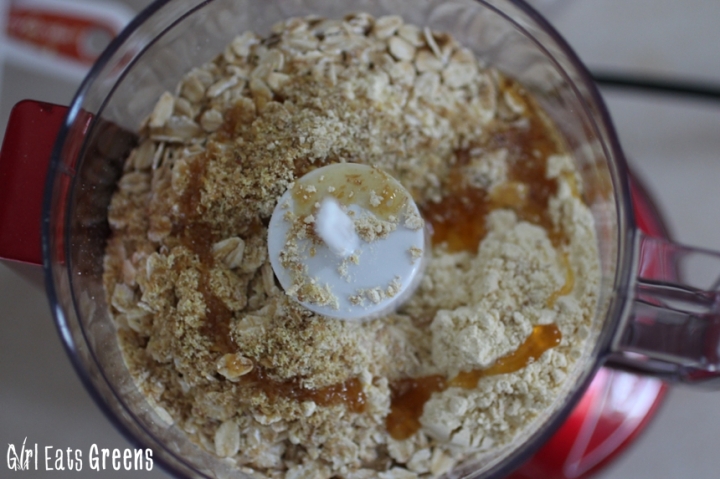 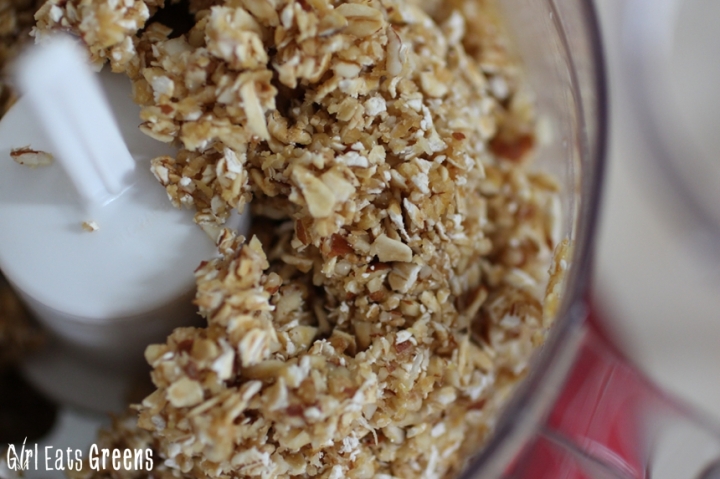 As for the filling, there really isn’t anything better than fresh, juicy peaches. So I wanted to let them stand on their own. I added a small amount of cinnamon and vanilla, and a small bit of chickpea flour for consistency, but they really didn’t need much dressing up. Once they were all sliced and coated and cooked, they tasted simply amazing. And my apartment smelled like heaven. 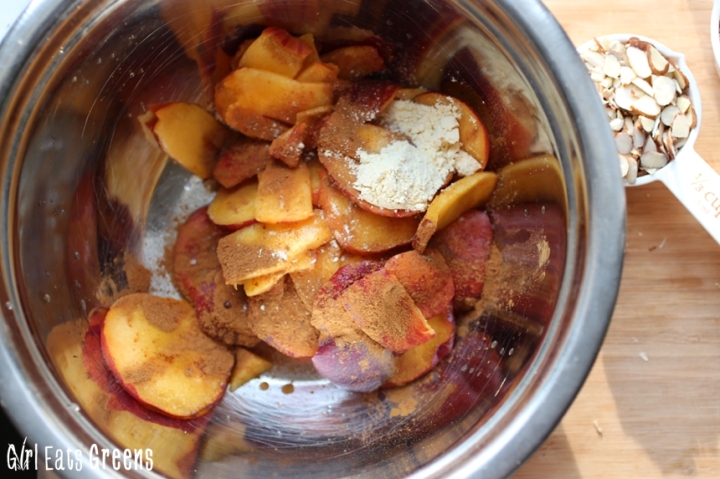 Now, one thing that’s quite confusing to me as I’m writing this is whether I actually came up with a cobbler. What’s the difference between a cobbler, a crisp, and a crumble? I have no idea. According to this Huff Po article, what I ended up making was a crumble. Who knew? So while I set out for a cobbler, I ended up with a crumble. Either way, it was darn delicious. 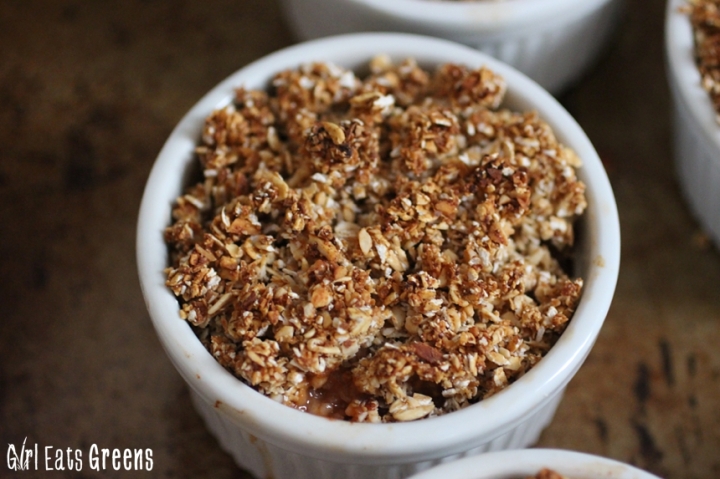 The best part about this dish (aside from the awesome flavor) is the fact it’s totally guilt-free. I almost ate it for breakfast. But it turned out R ate the last one as a midnight snack while I was sleeping. Looks like I’m going to need to make another batch of these. Stat. 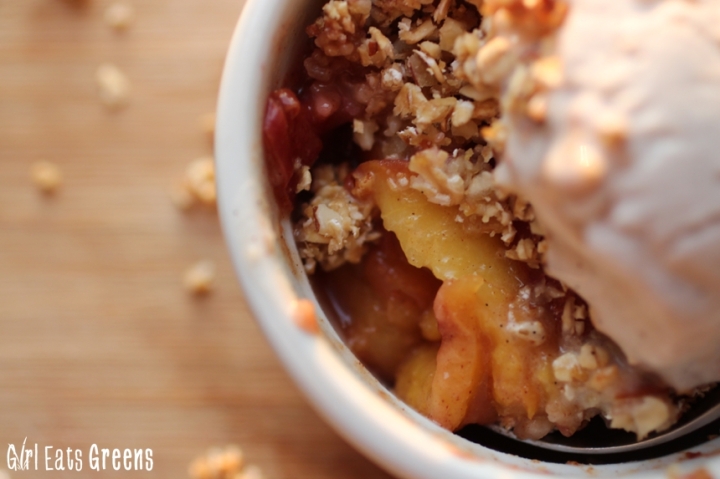 Note: You can store these in the fridge for a few days and they’re delicious re-heated or eaten cold. I suggest calling dibs on the last one ahead of time.