So long sweet summer! Are you all as slightly sad as I am that we’ve officially ended the summer season? I woke up this morning with a hint of the blues. Not only does the end of summer mean less time for beach trips and flip flops, but it also means the sun is going down sooner. And I’m a huge huge fan of light. I need lots and lots of it. To get up in the morning, and to be able to churn out new recipes post-work during the week. After an impromptu week off from the blogosphere due to craziness at work, a summer migraine, and a pup who had surgery, I’ve decided to switch up how things work here at Girl Eats Greens. To keep my sanity, I’ll be going down to one recipe post a week – on Saturdays. And doing NYC restaurant reviews on Thursdays, as warranted. So far, Travel Tuesday posts have exclusively been about my epic Southeast Asia trip – but that’s going to change too. I travel a decent amount. Not always to exciting far-away places like Asia, but sometimes just to little spots around the country. So I’m keeping up Travel Tuesday posts, also as warranted. With planned trips over the next few months to Fort Lauderdale, New Orleans, Atlanta, and possibly Nashville, I should have enough opportunities to keep up the Travel Tuesday posts every now and then. But for today, I’m all about Madison, Wisconsin.

In August I was lucky enough to have a 10 day personal/work remotely trip to my hometown for back-to-back weddings. The first weekend I spent the weekend in downtown Madison – one of my favorite places in the country and the location of my 4 year college experience. Madison in the summertime is gorgeous, and the weather while I was there more than cooperated. Since I’ve been away from Madison for 8 years now, when I go back there’s always so much that’s changed – especially near/on campus – that I have a really hard time keeping up with it. 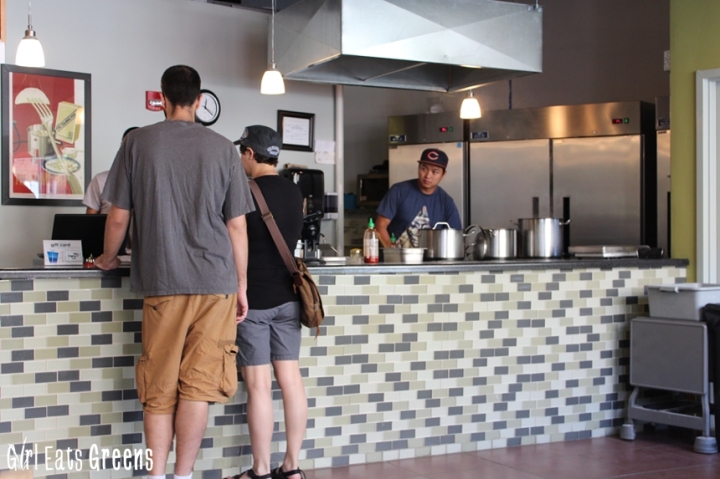 This of course covers buildings that have been torn down, moved, or built. But it also means restaurants and my favorite college bars are changing constantly. While in college, one of my favorite teeny tiny stops on State Street (a street that runs from the capitol building right to the foot of Bascom Hill on campus) was for dumplings at Pel Meni. It was a whole in the wall place that was delicious for lunch or for post-bar food. While I was still in college Pel Meni had closed down. To my amazement and sheer delight, it has re-opened not too far from State Street and definitely close enough to all the downtown action that I couldn’t resist popping in for lunch before the wedding.

Pel Meni is about as straight-forward and simple as it gets. Just walk up to the counter, decide on a full or half order of meat or potato dumpling, and decide if you want “the works” toppings or plain. Take a seat and within 5 minutes someone’s calling out your name with a delicious steamy plate of dumplings just for you.

I had always gone with the potato dumplings with “the works” (butter, cilantro, yellow curry, spicy sauce and a side of sour cream) in college. Now that I’ve successfully made the switch to vegan, I placed my order for “the works” without butter or sour cream. As I was ordering another worker asked if I was vegan. I said I was, and he profusely apologized and explained he thought there might be egg and or milk in the pasta for the dumpling. It was one of those heartbreaking moments. I was torn between finding another quick spot to eat and leaving my dumpling craving aside. Instead, I decided to go for it.

While everything I make at home is vegan, and I try my hardest to keep foods I eat outside the house vegan, there are simply times when I give in. This was one of those instances. In a bit of denial, I told myself that the man didn’t know whether or not there was egg or milk in the pasta. He just said there may or may not be. So I went ahead anyway. Please don’t judge. 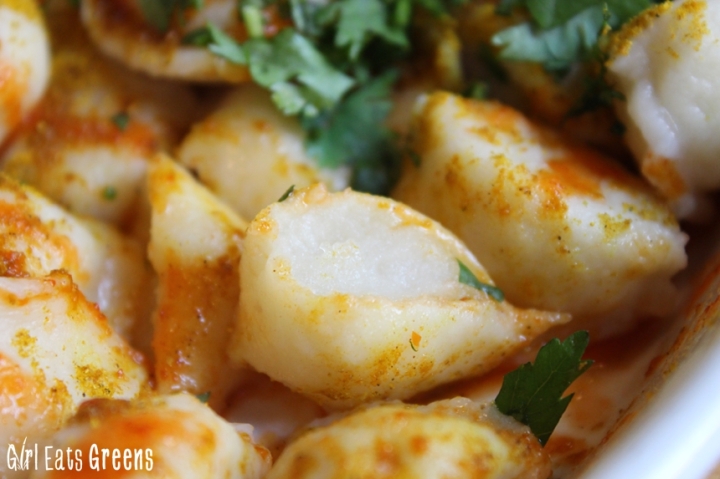 The dumplings, while in a different location, were just as amazing as I remembered in college. Full of flavor and simply delicious. I think the real secret ingredient might have some sort of addictive powers. They’re simply little balls of potato rolled into pasta and topped with some spices but they’re out of this world. Little balls of heaven. They’re extremely filling – I’ve never gone so far as to order more than a half order – and they definitely hit the spot for a quick lunch pre-night of celebrations. The chili sauce was just spicy enough to make my nose sweat a bit and the cooling flavors of the cilantro was a perfect contrast. 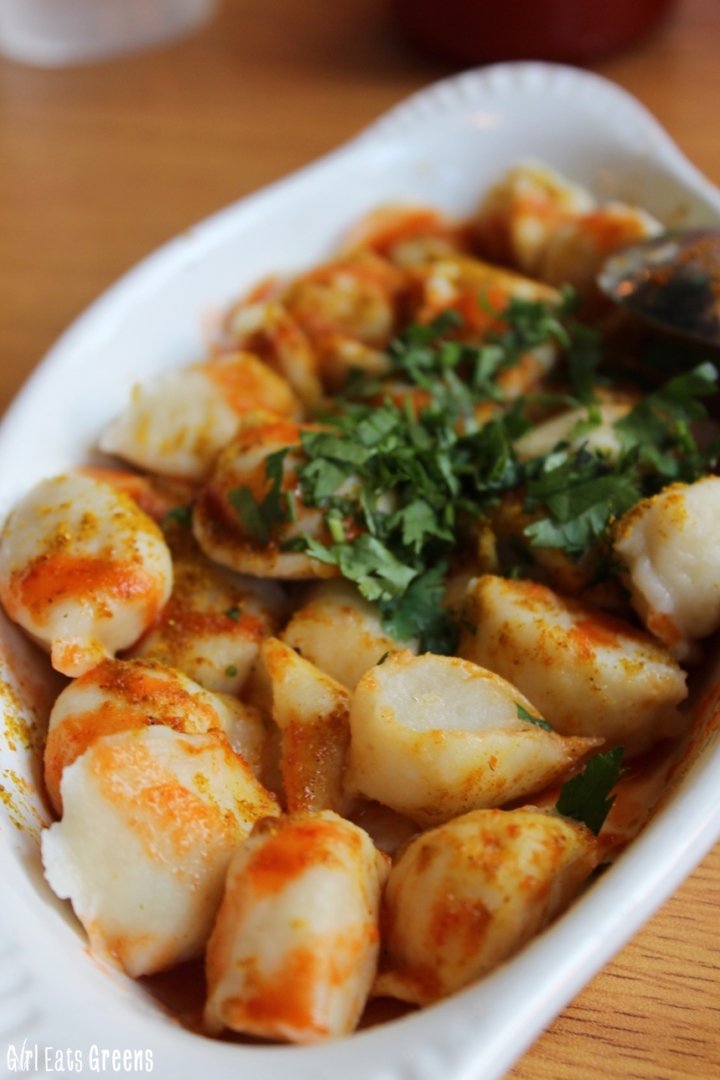 Now, I can’t recommend the restaurant if you’re a strict vegan – seeing as though there’s that unknown existence of egg or milk in the pasta – but if you’re a vegetarian or meat-eater and you find yourself in Madison, you simply must go. Immediately. And for $4.50 for a half serving, it’s about as economical as a quick lunch can get. Or a late-night craving fixing, for that matter. 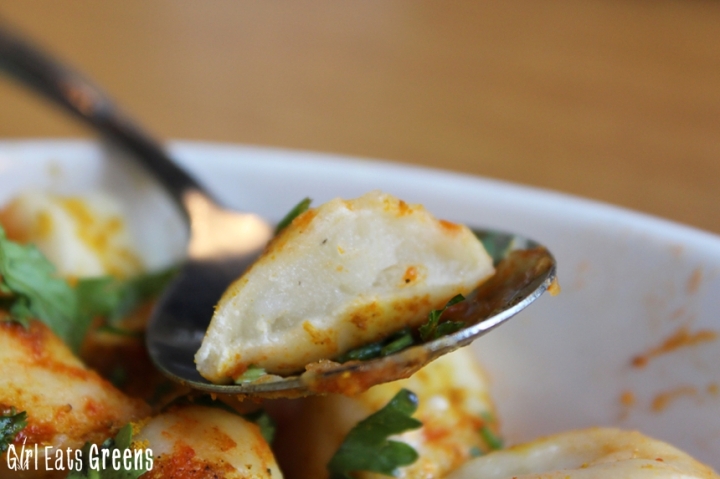 Join me again Saturday for a new recipe post for a brussels sprout salad, and again next Tuesday for one more edition of Travel Tuesday the Madison version where I took on the entire farmer’s market. And it was glorious. Happy almost fall everyone! It’s great to be back.