My next birthday is going to be a really big one. And since I’m a big planner, I’ve already started daydreaming an epic trip to celebrate my birth (or really just to get me out of the country when the big day comes – I think it will be much easier to take if I’m on vacation and preferably oceans away from my day-to-day life). A good friend of mine and her fiance are currently living in Beijing, so we’ve been plotting an Asian tour with stops in Beijing, Vietnam and Thailand. It’s really Thailand that I have been fantasizing about the most (I’ve already found the one and only vetted NGO elephant sanctuary and I’m dying to go). In my quest for all things Thai as of late, I stumbled upon a review for Thai Market on 107th and Amsterdam. The review claimed the restaurant has some of the best authentic Thai food and with decent prices, is a favorite among the Columbia crowd. The other night, I decided we simply had to try it.

The first thing that I loved about the restaurant was its attention to detail in the decorating process. From the red umbrellas to the giant photographs on the wall, to the street signs and golden bells- everything is in line with the Thai motif. Even down to the menu which looked like a newspaper. 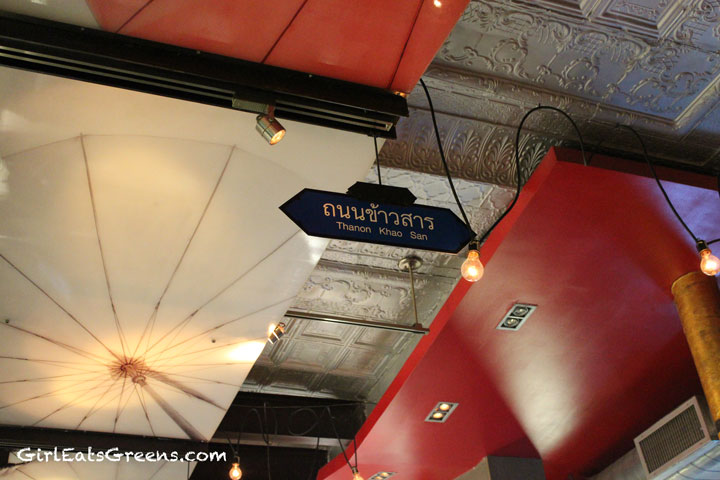 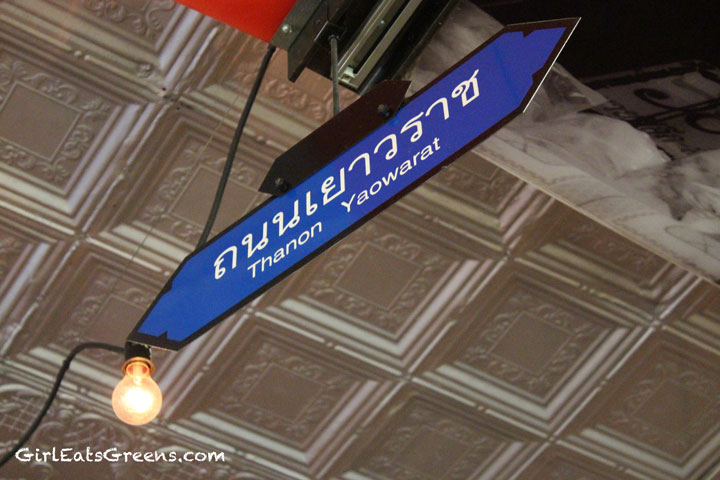 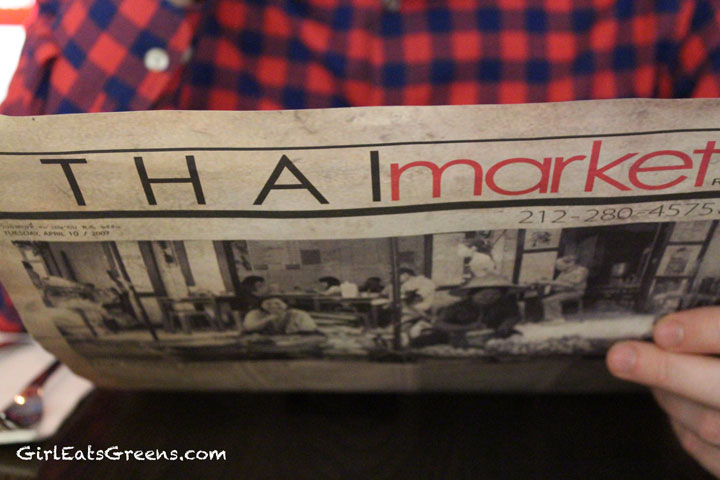 The place gets major cute points. It was, of course, packed on a Friday night and they don’t take reservations. The bar area is pretty big and had there been an opening there, we could have easily saddled up. We waited about 25 minutes or so, which is in no way unreasonable for the time and day we were there. The hostess was very attentive to how long everyone was waiting, and I even saw her ask one party to leave – they were camping out, had already paid their bill and were just sitting around. My ever-increasing hanger appreciated that.

R wins on the drink ordering. I was boring and had a glass of malbec ($8 wine just makes me happy) but R ordered some specialty cocktail that neither of us can remember the name for – but it was basically a delicious adult kool aid. Which reminded me of when we first started dating – for some reason in the first few dates R was notorious for ordering something that sounded good, but arrived in what may be considered a “girly” form. Usually up, often pink, and not at all what he was expecting. And in stark contrast, my drink would show up in a tumbler on the rocks without a hint of pink. But enough down memory lane… let’s get to the food. 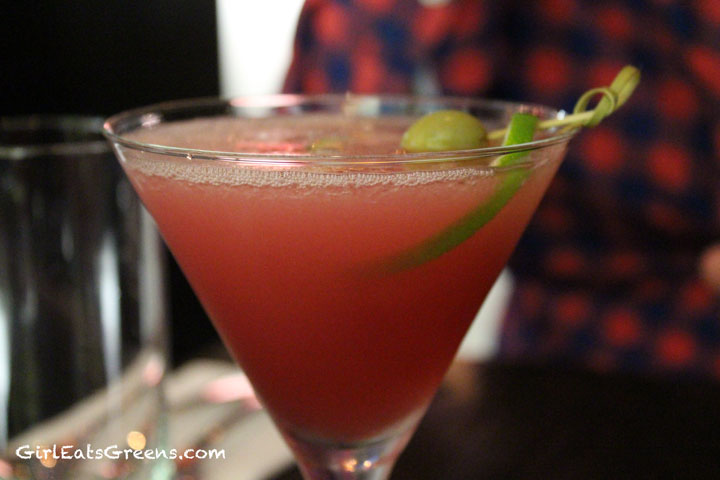 We started with the Gu Chai – or steamed vegetable dumpling. These were decent, a little flimsy (one of them fell apart in the soy sauce), but tasty little morsels. They came out very fast, as did the main course. 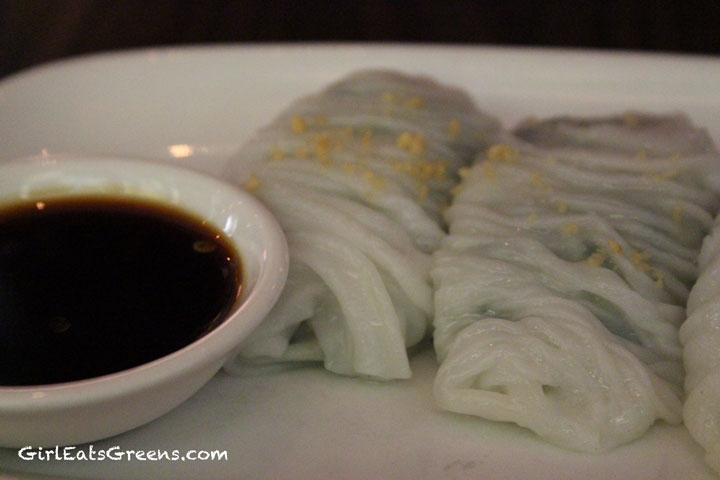 R went with the Eggplant Thai Basil with fried tofu. He devoured it in no time, and was right when he thought I wouldn’t love it. It was a little greasy for me to have ordered as a main dish, but the bites of eggplant I stole off his plate tasted wonderful. 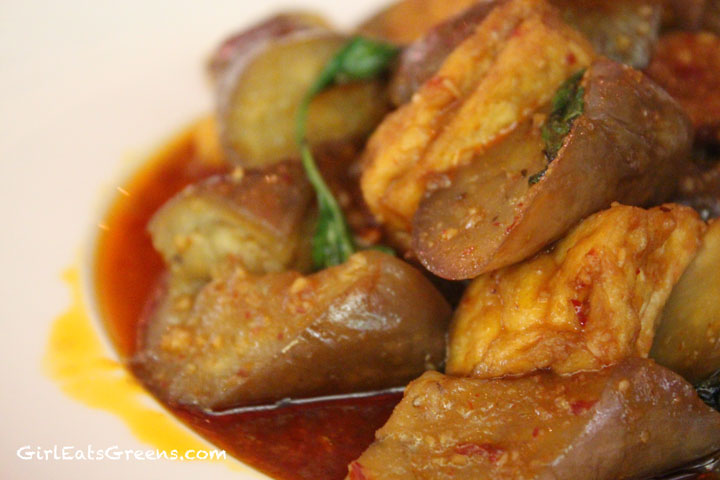 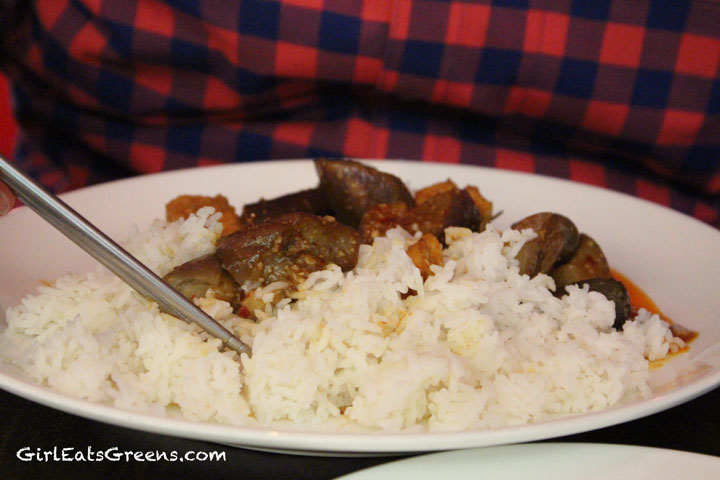 I ordered the vegetable curry with steamed tofu. I’m a bit partial to green curry rather than red, but this was a good curry – spicy but sweet from the coconut milk. I originally planned on eating half and saving the rest for lunch the next day…but I couldn’t stop myself and basically polished the whole thing off.

The server was attentive, and I’ve already said the decor was cute. The bill was definitely good – for a date night we’ve sometimes spent twice as much. It won’t become our go-to, I’m still partial to our favorite Thai place closer to our apartment, but this is definitely a cute spot and with great food, cheap wine, ambiance and good service, you really can’t go wrong here.