Well hello there and welcome to the 2014 Virtual Vegan Potluck! Maybe you’ve gotten here through the wonderful folks before me, or maybe you’re a follower of mine and are all “wait, what is this vegan potluck you speak of?” Basically, the Virtual Vegan Potluck is a big blogger party where a bunch of us get together and share awesome vegan recipes potluck style. We’re all linked up (see buttons at the bottom of the post to go back or ahead), starting with appetizers and moving all the way through to desserts. It’s one of my favorite events all year – as it’s a great opportunity for those of us with delicious treats to share with a broader community. And who doesn’t like new recipe ideas?! This year, I’ve gone with a main dish – last year I was a little timid and went with a side. But I think this new recipe is sure to be a real crowd pleaser, and it incorporates this year’s featured ingredient: citrus fruits. So enough backstory – let’s get to the empanadas! 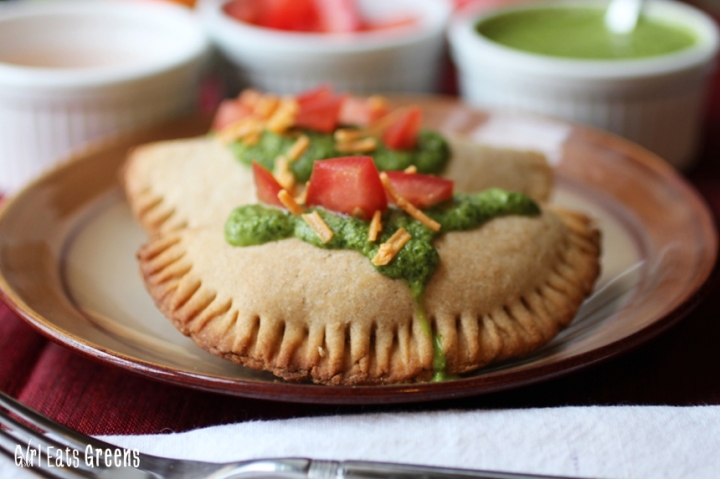 I recently took a work trip to El Paso, Texas – a place I hadn’t been to before – and had no idea was so close to Mexico. You can literally see Juarez from the highway. I was so excited to get some serious Mexican food while we were there and was pretty disappointed with the lack of vegan-friendly options.

Mexican is usually an easy cuisine for me to eat here in the city – there’s usually at the very least black beans and rice. But in El Paso, everything had cheese, was cooked with lard, or was meat-heavy. It left me lusting after some serious Mexican food while I stuck with guacamole and chips or pasta from the hotel restaurant. Womp womp.

So as soon as I got home I started dreaming up a recipe I could make that would not only capture all the flavors I was craving while also putting a vegan spin on things. Ground beef was in everything in El Paso, and I started by thinking I should try to create my own “ground beef” without the meat or any super processed store-bought substitutes. I remembered a taco “meat” topping I saw at a cafe in Fort Lauderdale that used walnuts, and I decided to take a spin on that and add lentils and quinoa too.

Now, if you have a limited kitchen like I do – and one pot – cooking both the lentils and quinoa can take a little more time than you might like. For a slow-cooker short cut (isn’t that an oxymoron?) you could toss the spices and walnuts, quinoa and lentils into a slow-cooker for a few hours while you’re at work (or doing other productive things like getting a manicure) and then it’s all cooked – and you didn’t have to do much!

Otherwise, use one pot at a time or if you’re fancy and have two pots you can multitask! I tossed the chopped walnuts in with the lentils so they got a little softer and less crunchy. They added a warmth and depth to the flavor without tasting overtly nutty. It’s definitely a combo I’ll be coming back to again and again. It’s definitely hearty. And I even tested it out on a meat eater who claims it does taste like ground beef thanks to the spices, just less greasy.

The hard part of this recipe is the dough. Any time you’re making dough from scratch it can be a bit hit-or-miss. So I decided to go with the devil I know and use a tried and true pastry recipe that I’ve used for quiches and pies before. I got it from my mom – and I have no idea where she got it from – but it’s a really good go-to and worked well in this case.

I rolled the dough out as thin as I could. I’ve found that using plastic wrap helps a lot. Maybe I’m just not patient enough with the rolling to let flour do all the work of non-sticking, but this works pretty well. I used a small bowl to measure out the size I wanted for the empanadas and the only big problem I had was moving the circles onto a baking pan. A spatula helps!

If you’re looking for something quicker and more simple, you can probably find frozen dough or even frozen empanada dough that’s already rolled to the perfect size that will make your life so much easier. Whichever way you decide to go with the dough – lower your expectations for how much filling you will be able to stuff into each empanada. I got a couple spoonfuls per empanada – but not much more.

Because I used a traditional pastry dough recipe, and baked the empanadas instead of the traditional deep frying, they were definitely helped by the addition of a sauce. I wanted to incorporate a bit of spice, a bit of tang, and some cilantro to balance out the flavors of the ground “beef”. So I mixed up lime juice and a jalapeño with the cilantro and a little oil – and created a delicious sauce that can be used for topping or dipping. I also like to top with a little Daiya cheddar and some diced tomatoes just to get even more flavors and veggies involved – and there’s the bonus of making them look pretty.

Start by cooking the lentils and quinoa. Add each to a separate pot with their water. Add the walnuts to the lentils. Bring to a boil, then turn down heat to simmer and cover for 10-15 minutes or until the water is absorbed. Set aside.

Preheat oven to 425. Place the flour and shortening in a large bowl and cut together with a fork until it starts to form pea-sized chunks. Start adding ice cold water (I like to put an ice cube in my water) one tablespoon at a time while you continue  mixing. You don’t want to the dough to be too wet or it will be hard to work with. Too dry and it will be hard to work with. It’s a tricky balance.

When you get it just right, pack it into a ball and then start rolling it out. Get it as thin as you can, and using a small bowl (or any other circular thing – a jar, cover, etc) to measure out circles for the empanadas. Re-roll any extras to try and use all the dough. Place the circles on a lightly greased baking sheet.

Add the spices to the quinoa and lentil mixture and stir until all the spices are evenly distributed throughout the mixture. Put a couple spoonfuls of lentil mixture into the center of each empanada. You’ll have some filling left over – but don’t worry it’s delicious as a taco filling or topping a salad.

Carefully fold one side of the dough on top of the other, and use a fork to seal the edges together. Bake 15-17  minutes or until the pastry is golden brown.

While the empanadas are baking, place all the sauce ingredients into a food processor and blend.

Serve topped with diced tomatoes and Daiya cheese and of course the sauce. Enjoy!

Like this recipe? Get help making this one and some of my others on the SideChef app – a great new app that I’m proud to partner with. It gives step-by-step directions (including timers) for a lot of my recipes and many others! Thanks so much for coming by and enjoy the rest of the potluck! 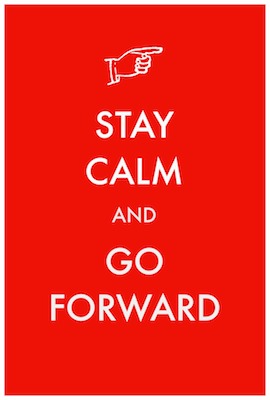