The first time I heard about the Natural Gourmet Institute was when they contacted me and offered a discount to their Friday night dinner to my readers – I sent it out over Twitter a few times and I was totally bummed I wasn’t available on the night they offered the discount. Luckily for me, they accommodated me and a friend the following Friday night.* But let’s back up and talk about what exactly the Natural Gourmet Institute is. Natural Gourmet offers chef training classes and public cooking classes that focus on whole-food, mostly vegetarian foods. According to their website, they focus primarily on vegetarian and vegan options, but they also teach how to cook organic chicken, seafood, and eggs. On Friday nights, the classrooms are turned into a restaurant and the students run the kitchen as well as wait the tables. The ambiance was surprisingly good – candle light and attention to detail all the way from the printed menus to the flowers and the burlap-like table runners. It had the rustic chic down pat. 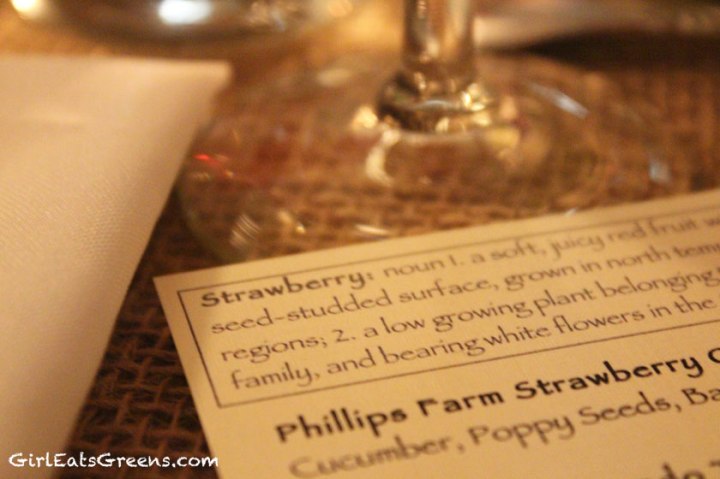 It was one of those crazy nights where NYC turned into an absolute monsoon. There was crazy thunder, lightning, and to say it was “raining cats and dogs” is an understatement. More like raining lions and wolves. So. Much. Rain. Which of course made running there from work and picking up a bottle of wine on the way a serious feat in and of itself. The invite said dinner started promptly at 6:30 and I was terrified we were going to miss it. Luckily, it was much more relaxed. We probably didn’t end up sitting until closer to 6:45-7, by the time they sat everyone down and started passing out the first course. 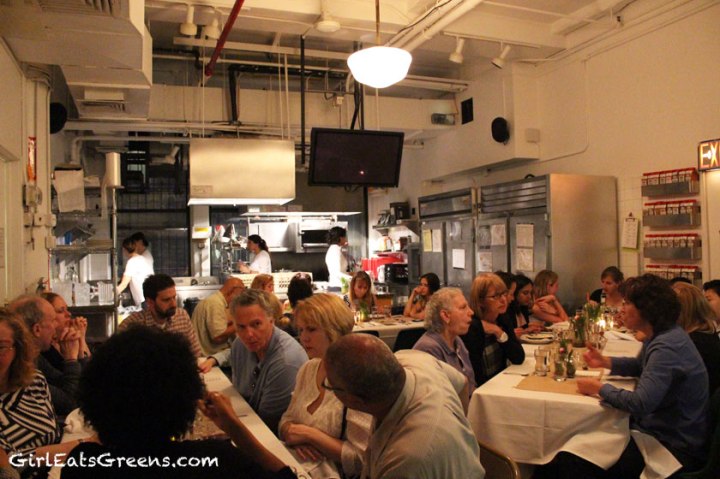 The night’s dinner had a strawberry theme, which was really intriguing. Each course incorporated strawberry in some way. I always like the idea of trying the same ingredients in different ways and I’m a pretty big strawberry fan so I was especially excited about this dinner. The first course started with a strawberry gazpacho with basil oil. It was pretty darn good, despite the fact I’m not a huge gazpacho fan. (something about cold soup still hasn’t really caught on with me – and if it’s fruit based what stops it from just being a smoothie in a bowl?) 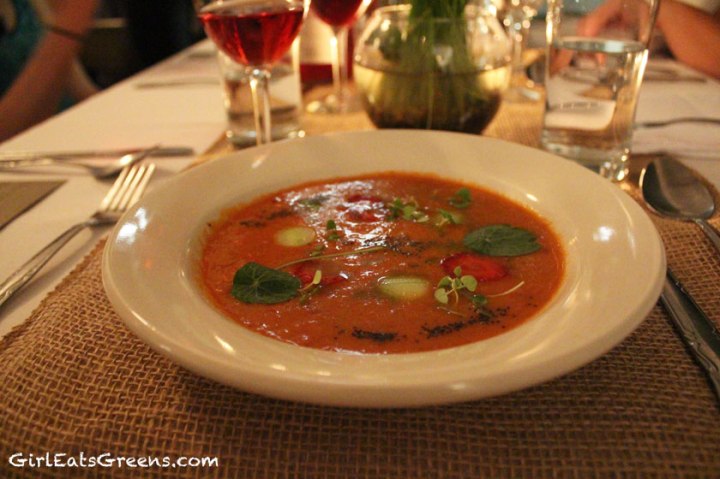 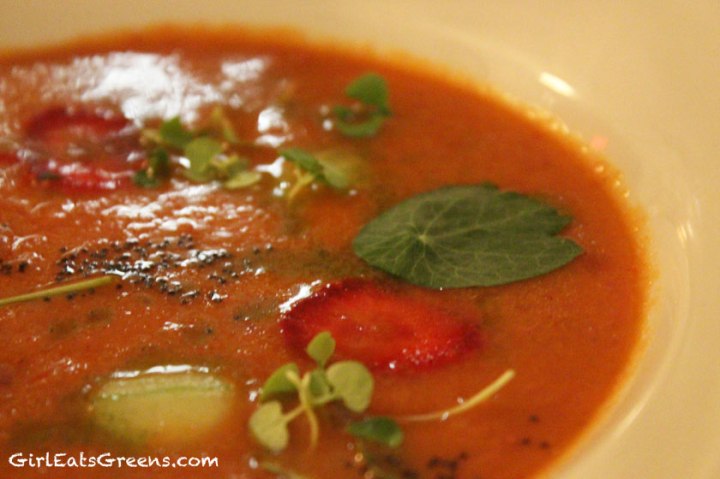 Shortly after the gazpacho came a round of avocado toast. It was delicious – but let’s be honest, I had it for breakfast. And have it pretty much 2-3 times a week. Avocado toast is my go-to breakfast, lunch, snack, whatever. As long as I have bread, avocados, and lemons on hand, I’m making avocado toast. So it’s not that this wasn’t delicious – I think I just expected a bit more from a culinary training than something so simple. Maybe I’ve seen too many episodes of Top Chef?

The main course was a combo of a fennel au gratin and a quinoa salad with pickled strawberries (and a ball of mozzarella which I accidentally took a bite of – I thought the whole meal would be vegan. I promptly handed them off to my vegetarian friend who was with me). The au gratin was topped with a mushroom soil, which during the Q&A portion (which I did love) we found was made by cooking mushrooms down and down and down until they resembled a crispy bread crumb. The dish was fine, but kind of bland. The quinoa salad was pretty tasty – I liked the pickled strawberry flavor with the more earthy flavor of the quinoa. They definitely had the presentation down, though. Everything looked so lovely and each plate was styled perfectly. 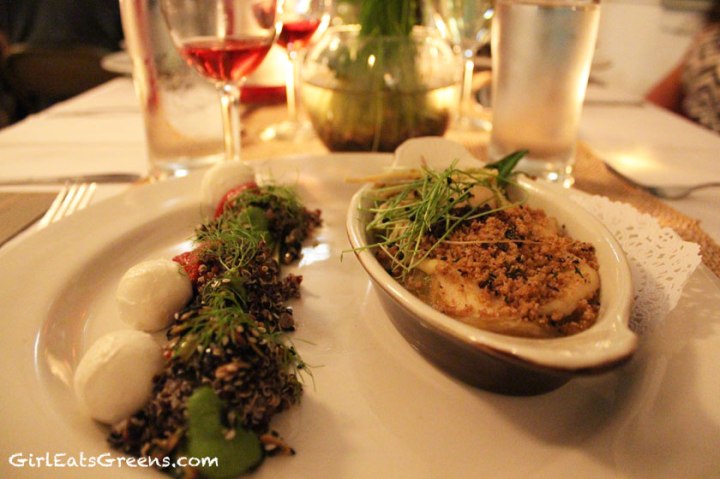 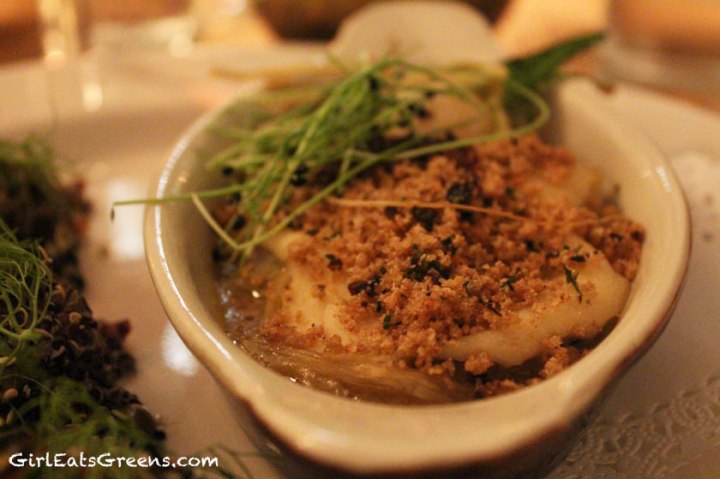 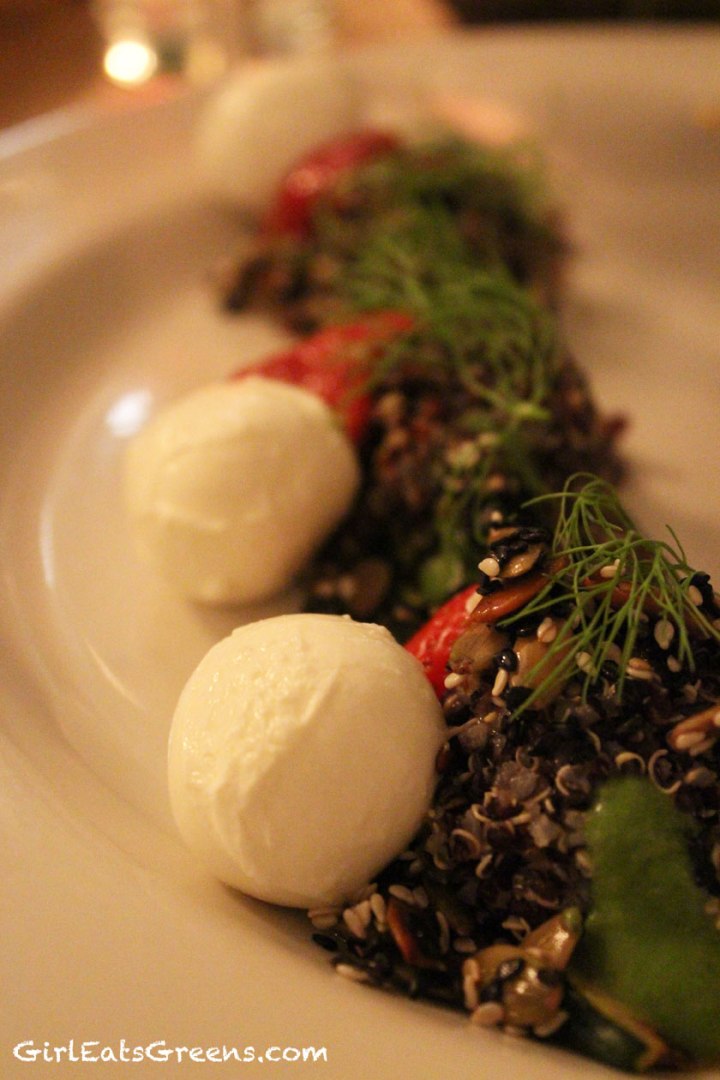 For dessert, there was an amazing mocha ice cream that I can’t remember what exactly it was made of, but it had a great creamy consistency that was spot on. The strawberry chocolate tart was really really good despite the fact that the crust was really hard (the girl next to me actually had hers fly across the room when she tried to cut it with a fork). That didn’t deter my sweet tooth though and the gooey chocolate and strawberry mixture were happily in my belly in about 5 seconds flat. 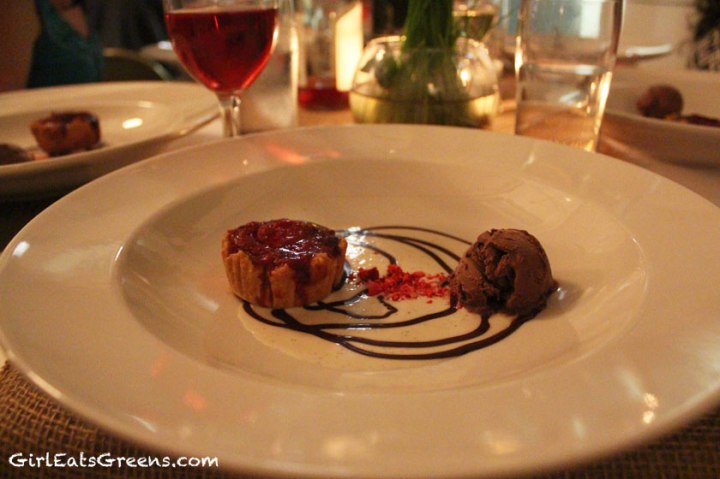 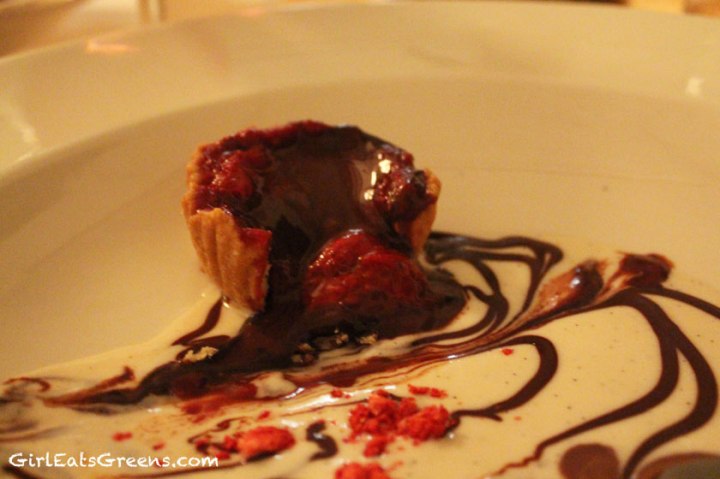 Overall, it was a really fun experience and we definitely had a good time. I would contemplate going back, especially as the menu is different every Friday. It’s an ok deal, about $50 for a 3 course BYOB. I may have been a bit disappointed with the meal because I had really amped it up in my mind over the two weeks between booking and the meal arriving. Perhaps I’ve seen too many “reality” cooking shows, or I’m just spoiled with the delicious restaurant options in NYC. But the thing I’ve been thinking while drafting up this post is that there wasn’t one thing on the menu that I’ve been thinking about after the meal. I’ve had many meals that were good, but I don’t have an item that I salivate over for days after. This was one of those meals. I’ve had others where I can’t stop thinking about a particular dish for days (or in some really amazing cases – months). I did love the Q&A with the chefs after dinner, though, and I highly recommend you try to go if you can. Especially since the menu changes so frequently. 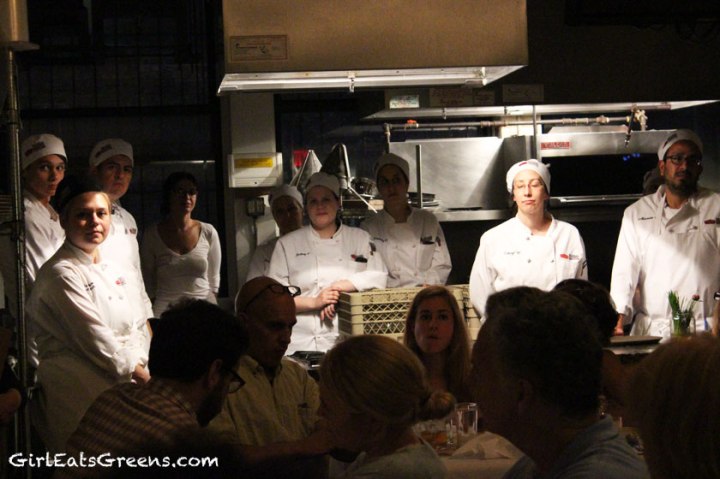 *Disclosure: the entire meal was comped for both me and my friend, but it was not a quid pro quo for a good review. I’m able to separate my opinions from free food and will always disclose when there’s freebies involved.