I have to start this post with how much I debated whether or not to write up this post. Most of my restaurant posts are recommendations – places you can eat as a vegan that you can eat where you might not originally think you can. This is not one of those restaurants. Usually, I would just not publish a sub-par restaurant review. But my experience here was so ridiculous and unlike any I’ve ever had as a vegan, I couldn’t not share.

Let me start at the beginning. I was traveling for work with a colleague who went to college in Nashville and I asked her for restaurants that we should go to. Her favorite restaurant is City House, a highly rated Italian restaurant with a James Beard Award-winning chef. Generally, this is a great incentive for me. I’ve been to a lot of restaurants with award-winning chefs and I’ve had nothing but amazing experiences. I even had one waiter return to the table after consulting with the chef and say “challenge excepted.” So with my colleague’s high recommendation, my experience with other award-winning chefs, and other high reviews, I was so excited to head to City House for dinner. 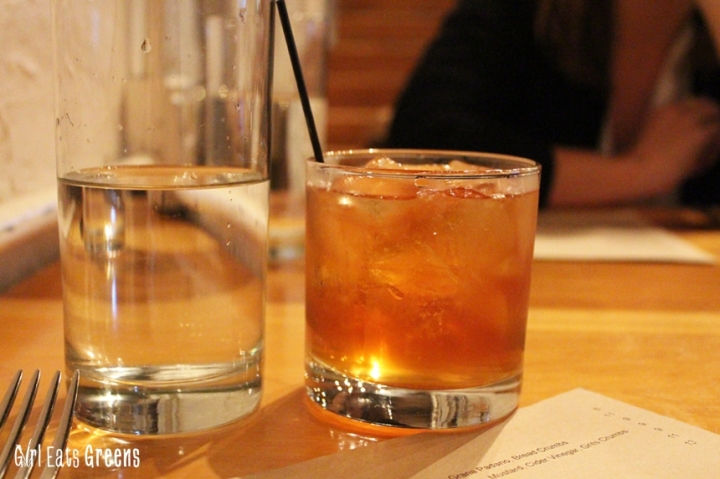 We ordered drinks, which were delicious, and looked over the menu. I was immediately interested in the kale salad, which was topped with pecorino. I often order things without cheese, and didn’t think this would be a problem. And that was when the evening quickly took a turn for the worse. While we were ordering, I told the waiter I’d do the kale salad without cheese. His response? We can’t take the cheese off. This was baffling to me. I asked if all of their food was pre-made, assuming that there was no way a nice restaurant would have items pre-made. He confirmed it wasn’t pre-made, but said the chef didn’t allow for changes to the dishes. That got me. I’m not allowed to make changes to a dish? Aren’t I the customer?

Now, I generally am pretty reasonable at restaurants. My first job was as a waitress and I worked as either a waitress or a bartender all through high school and college. I know how difficult customers can be and I always try not to be that person. I rarely send food back or make a fuss if my order comes out wrong. But after working in many restaurants in my past and always doing my best to accommodate allergies, special requests, diets, etc. I simply could not believe I couldn’t order the salad I wanted without cheese. The waiter recommended a different salad instead, one with cabbage and red onions – neither ingredient I’m a big fan of. I asked the waiter if he would at least ask the chef for me before he turns me down, convinced that maybe the waiter was wrong. That if he just asked the chef if he would leave the cheese off just this once for me, that it would work out. The waiter left and came back. Nope, the chef simply would not allow the dish to be served at all without the cheese. There was also some sort of pasta special that night with butternut squash and vegetables that I asked if the cheese could be left off of. It was the same story. I believe it went something along the lines of “the chef created the dishes with all these flavors in mind and he won’t leave one of them out.” I asked if we could have the cheese on the side, and said I would share the salad with my colleague who could put the cheese on her portion and experience the flavors as the chef intended. The answer? No.

Don’t get me wrong, I’m all for creativity and a vision in a chef. Not that I am a chef, but I love food. And I like to put flavors together and I can understand a vision and the way you think things should be served. But if I’m paying for food at your restaurant, don’t I get a say in what I eat? Apparently, at City House, you don’t. So I asked the waiter if he would ask the chef if he would create a dish for me that incorporates whatever he wants to put together – as long as there was no meat and no dairy. I said I would literally eat anything he wanted to assemble. The waiter said they don’t prepare anything off-menu. I told him to ask anyway. I shouldn’t have been surprised when the answer was no. It was starting to feel like that Seinfeld episode with the soup Nazi.

I didn’t want to completely embarrass my colleague and since I knew this was one of her favorite places, I said I would stay so she could eat as long as we went to another restaurant so I could eat later. In the meantime, I did break down and order that cabbage and red onion salad and a side of broccoli with peanuts and raisins. 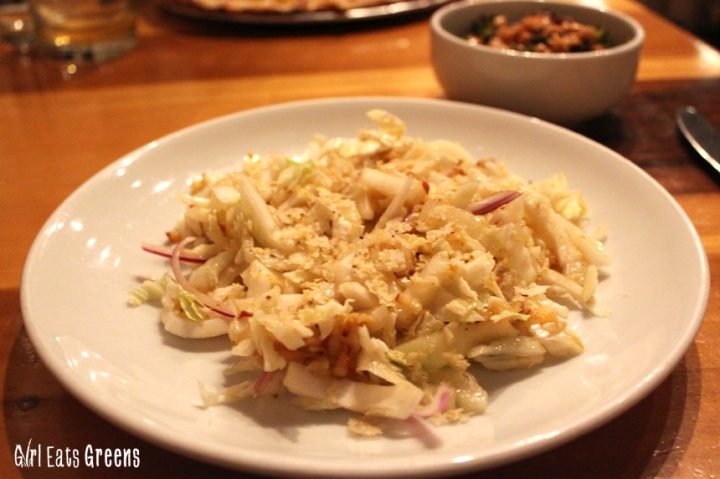 The cabbage was drenched in vinegar and overpowered by red onions. I ate a couple of bites before throwing in the towel. I’m not sure if it was the chef taking out some anger on me by making the salad inedible, or if that’s actually how the salad is normally prepared. 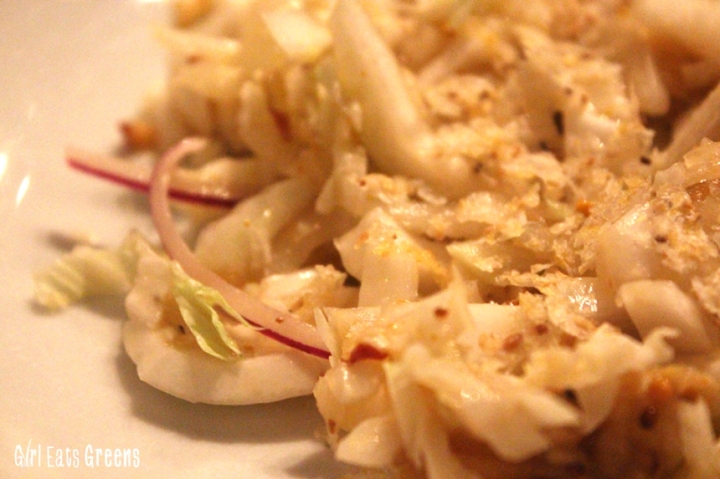 The broccoli was actually pretty delicious, so I can’t really complain there. But overall, the entire experience just left a bad taste in my mouth – and it had nothing to do with the cabbage. The waiter appeared to be genuinely sorry that the chef wouldn’t accommodate me. I can only assume, after having worked with some pretentious chefs in my day, that if they’re bad with customers, they’re even worse to servers. When I asked the waiter to talk to the chef a couple of times, I’m sure that didn’t bode well for the waiter. But I also just think the way I was treated was ridiculous. Granted, I don’t have a severe dairy allergy, or a gluten allergy, and I choose not to eat meat or dairy. But it’s a choice I should get to make. Just as I will choose to never go back to that restaurant if I find myself in Nashville again.

Yes, this post may be the epitome of first world problems. And yes, I’m not entirely sure how I feel about sharing this complaint in so public a fashion. But at the end of the day this blog is about food, my love of food, and (I hope) helping others to find healthy and delicious options. I always write about places I find accommodating to my diet, and how could I censor or not share a place that so obviously wasn’t and didn’t care if it was? Luckily, I didn’t spend any money here. My colleague felt so bad about the whole thing that she picked up the check. If you’re not vegan, have no dietary restrictions or allergies, then you might love City House. Otherwise, I would recommend spending your money elsewhere. There’s a great vegan-friendly place a couple blocks away, where I had a real dinner that night. It’s called Germantown Cafe. Check it out if you find yourself in Nashville looking for good service, good food, and an unpretentious chef.