Tuesday, as I realized that I hadn’t yet written my planned Travel Tuesday post I totally freaked out. I’ve been having a bit of a hard time lately, work has been crazy, and I’ve been deathly worried about the lil pup. She was scheduled for surgery on Wednesday morning so Tuesday night I decided I should just relax, not worry about my blog schedule or other timing, and just cuddle with the pup. She came through surgery really well – she had to have a couple glands removed and we’ll get the results back from pathology in a few days. But rest assured, she’s recovering well and we’re all optimistic all the bad stuff is over now. But before I get into the real meat of today’s post – which is French toast – I figured if I was going to lead with what a hot mess my life has been lately I should at least give you a gratuitous puppy shot to make up for it. 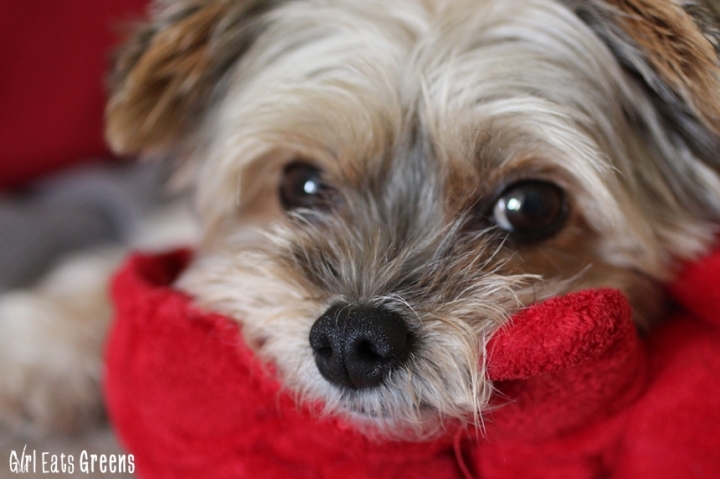 I mean come on how could you not fall for that little nose? Other things I’ve fallen for? Fall. And all things pumpkin. Which someone told me makes me “basic.” But I didn’t get it.  I was in Atlanta recently, and was really craving French toast for some reason. At the time, I wasn’t sure I could pull it off. But I decided I was definitely up for the challenge and thought I’d make some when I got back. 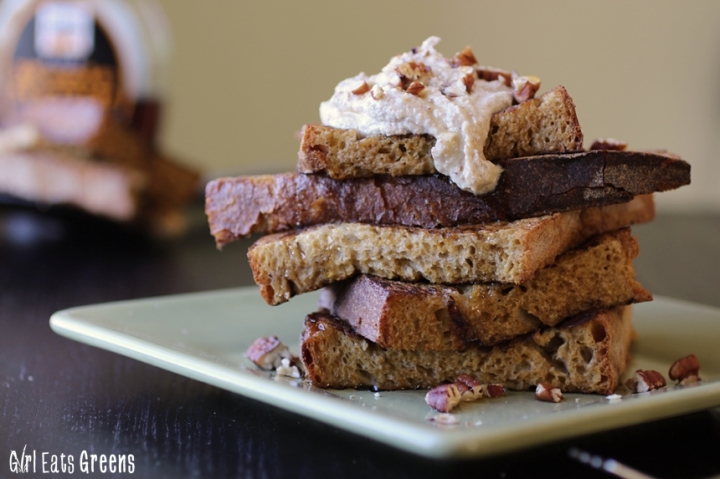 I think what I was worried about most with the French toast vegan recreation was the egg replacement. I was pretty sure that I could replace the egg in the batter with my egg replacer. But the egg replacer I use isn’t gluten-free and I really wanted to make a recipe, that while I was using regular bread, could easily be tweaked to make it gluten-free. So since I’ve been on a pumpkin kick, I figured that pumpkin might actually be a good way to thicken up the milk kind of like an egg would. And therefore, pumpkin spice French toast was born. 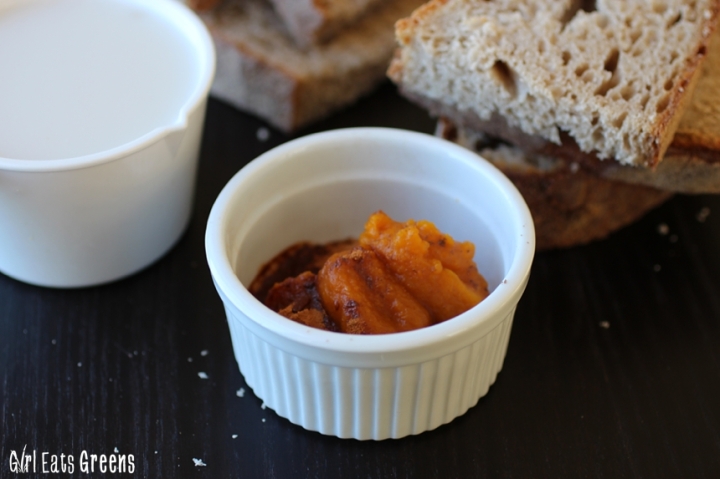 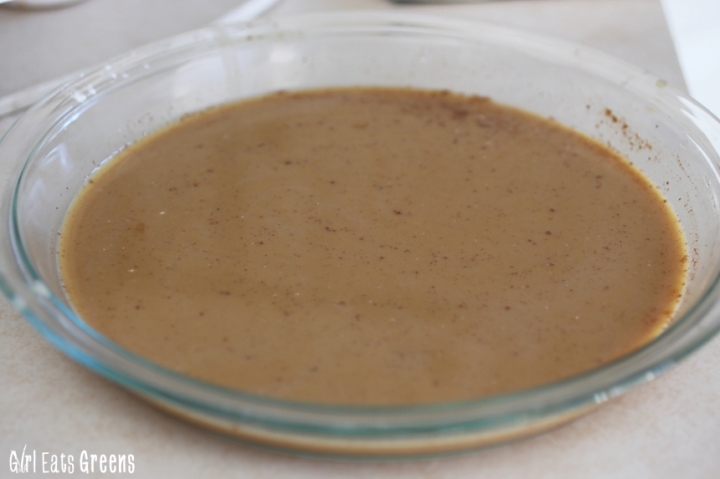 I picked up a big loaf of crusty bread from the store – I thought it would be better than my boring old sliced loaf of bread. It may have been a game changer. The extra fluffy slices were perfect for soaking up all the pumpkin and cinnamon spices and made for the most amazing slightly crispy on the outside ooey gooey on the inside french toast – I would highly recommend grabbing a big ol’ loaf of crusty bread for this recipe if you can.

For the batter, I mixed canned pumpkin with almond milk and a touch of tapioca flour. The consistency was perfect and I didn’t miss an egg in there at all. I was particularly surprised by how pumpkin-spicy it turned out. The flavors were amazing together. There wasn’t too much sweetness or spice to it, but just enough to give it a little something special to stand out from the average french toast. 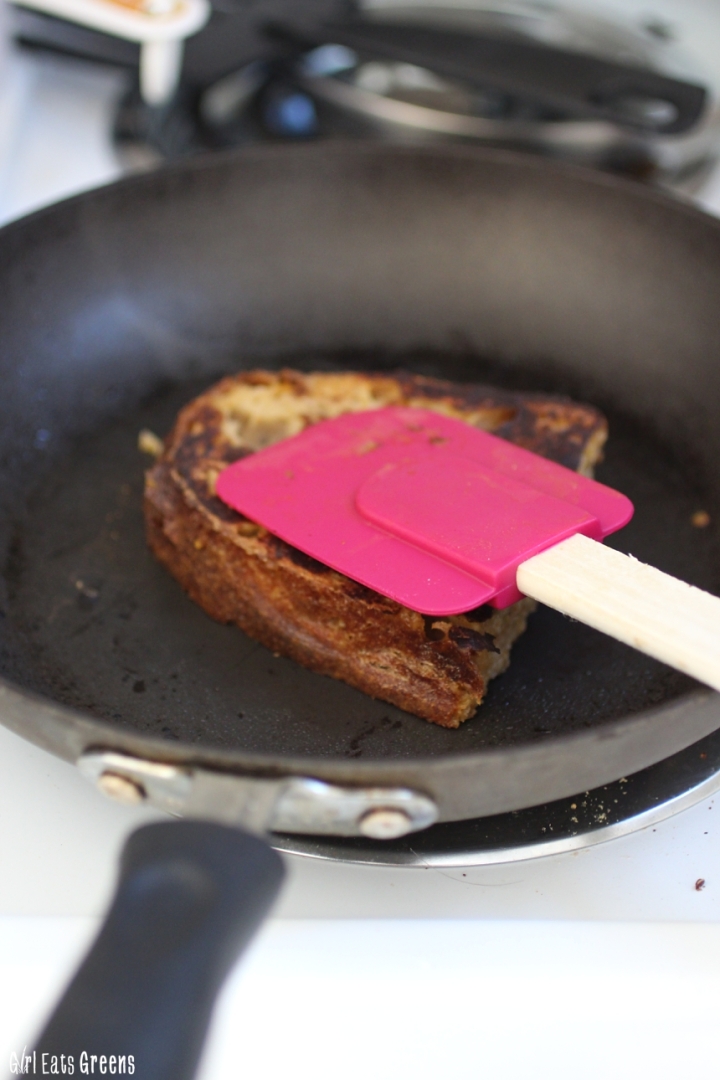 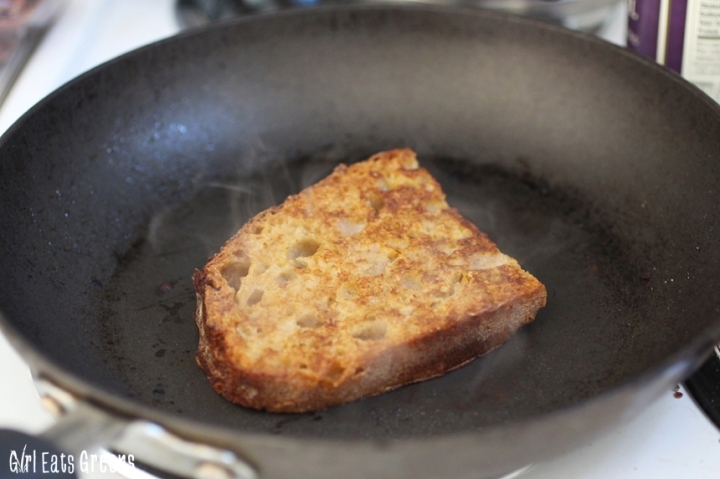 I must admit, I wanted a touch of something sweet yet savory to top the whole thing off and then the idea for a ricotta popped into my head. Ever since I learned how to make tofu ricotta it’s been one of my favorite foods to tinker with and put different spins on. I really had wanted whipped cream or something to top this with – so I decided to play with the ricotta recipe and shake it up a bit to pair with the French toast. I added some maple syrup and pecans and WOW this was the absolute perfect topping. 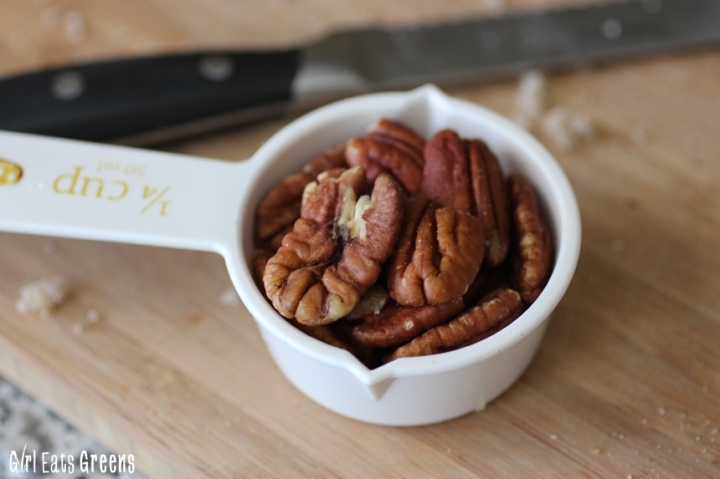 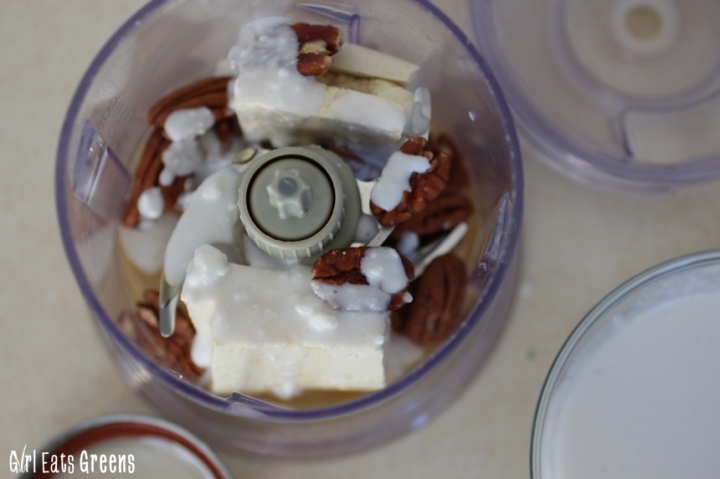 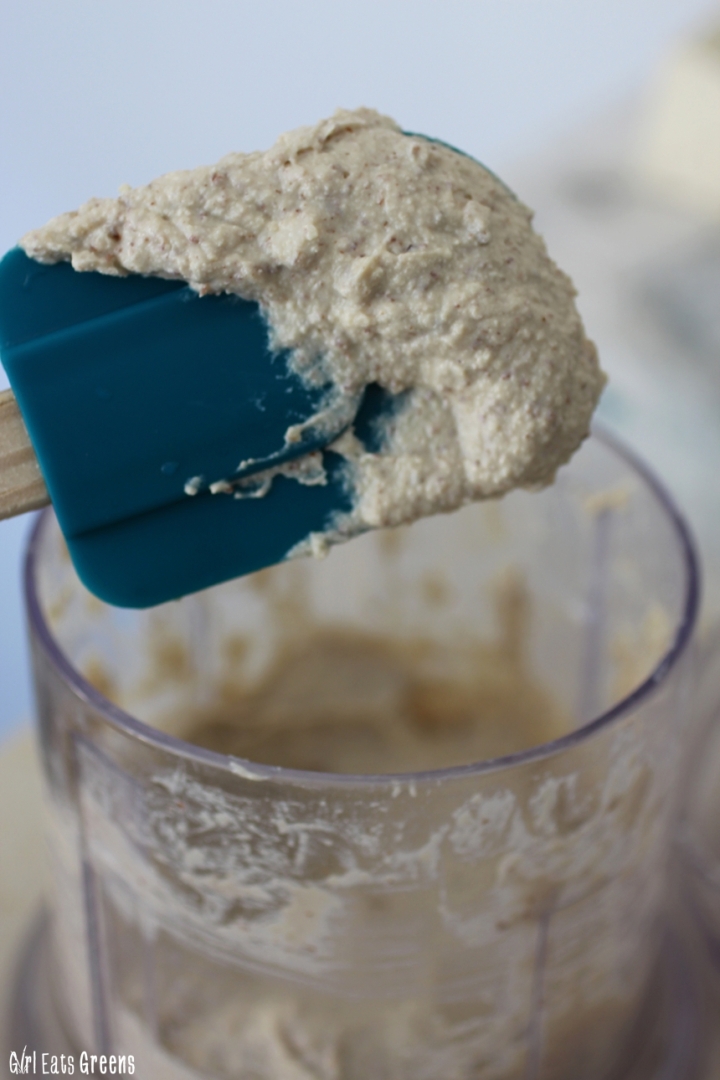 I also liked that with the tofu and pecans it added some extra protein for breakfast – it really helped me stay full for a long long time. This recipe as a whole made such a ginormous batch it lasted into the week and it was amazing having French toast for breakfast on a weekday. This is one of my new favorite recipes, I have to say. This was actually my first time making vegan French toast and just like the first time I tried pancakes, I was really surprised by how easy it was to recreate a recipe I thought had to have eggs. 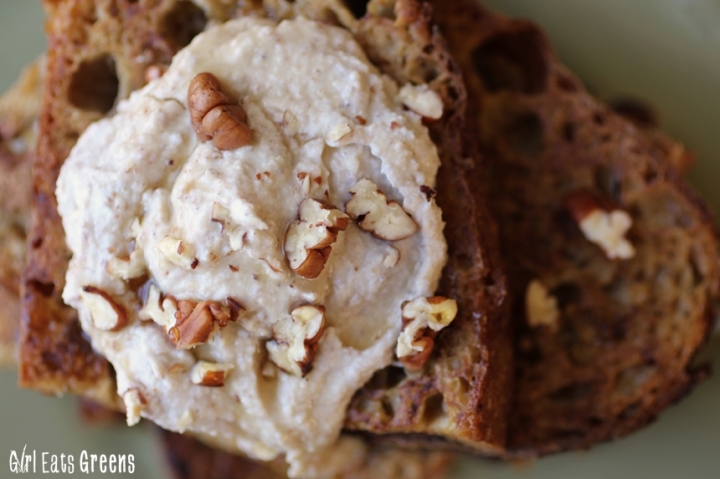 It’s doing little experiments like this on weekends that make doing this blog so much fun. It’s great to push myself and my thinking and be creative and also – of course – eat delicious food! So if you’re still into pumpkin or looking for something new to try out – definitely take this recipe for a spin and let me know what you think! I’d love to hear your thoughts. In the meantime, lil pup and I will be couch surfing until her stitches come out. And maybe we’ll come up with another delicious concoction to share with you all. 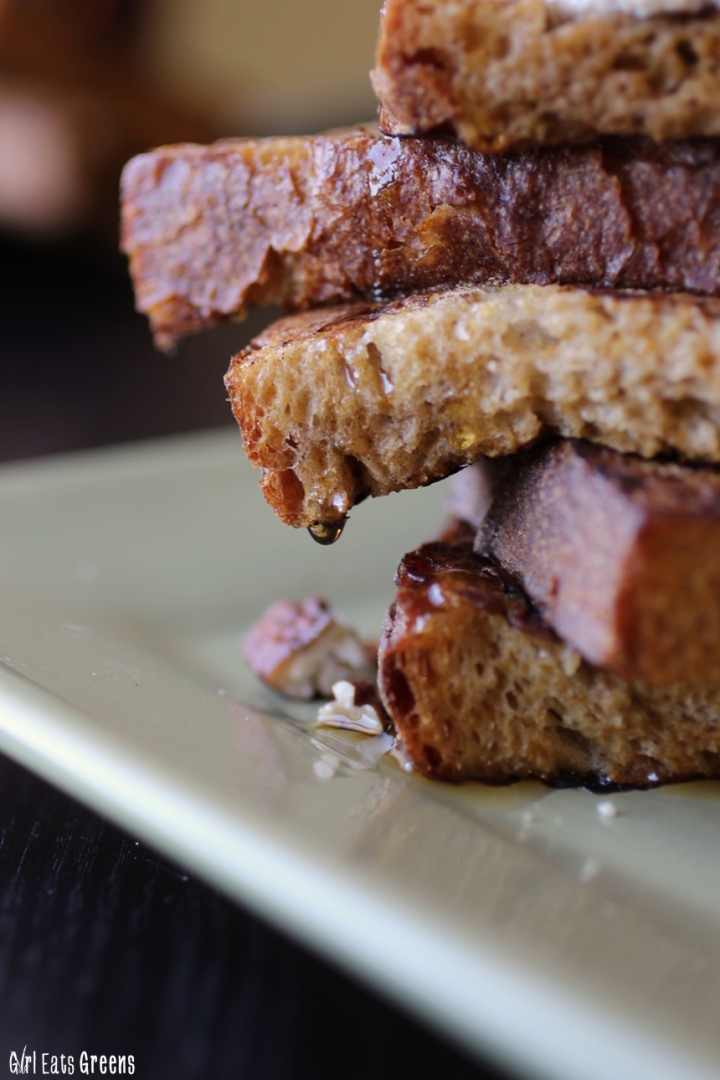 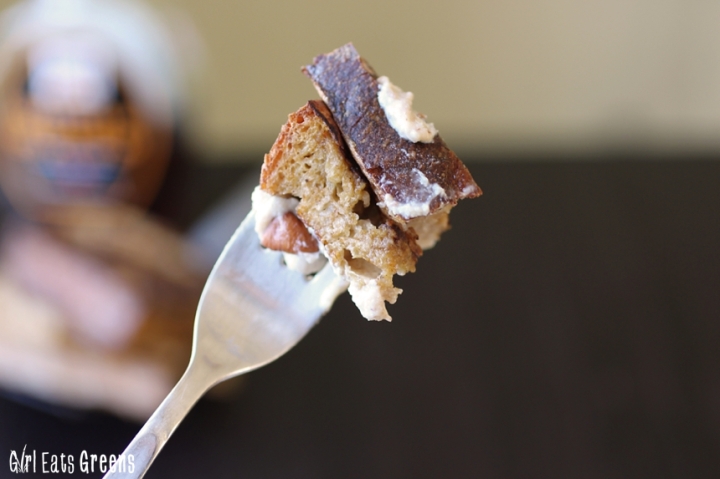 For the French toast: